I am so sorry, I have not contacted you since I arrived here. It has been rough, and this is the first time I am safe enough to stop to write. I did not come to America because I wanted to, I do not like this country, they do not like me either. I fear if they caught me I would be killed. Ever since water became a global scarcity, Westerners started putting up walls across their borders, stopped accepting refugees, and the crackdown on immigrants has become downright deadly. They shoot on sight, they have no mercy, they only care about the people within the borders and even then, they only care about the citizens who join the military. This is crazy to me because Americans are the ones largely responsible for this water scarcity mess, with their incessant desire for golf courses and pools in the desert. Now we are all suffering throughout the world because of Americans supersized lifestyles that rubbed off on the rest of the world through globalization and development. I mean in 2017 the average American used 100 gallons of water a day and that doesn’t include their obsession with the resource hogging beef, now they wonder why they do not have enough water. If it was not for them I would be finishing up my Ph.D. now, instead, I had to flee. I could not stand by and watch our family die because of what the West did. I had to leave to find water, but I promise I will not forget you, family, I will bring you all up here once I can secure a safe spot with the necessary resources. This all could have been avoided if Westerners didn’t use more than their fair share. But you know how stubborn Americans are, they weren’t willing to change their behavior until it was too late.

I am terrified of being found as an undocumented immigrant so I have not gotten close to any civilization, instead, I have been roaming the desert. Grandma’s knowledge of how to live off the land has really saved me, I would not be alive right now if I did not have the skills she gave me. I only now wish I would have listened to her more, I always thought that her ways were the old ways and were not relevant anymore. I wanted to learn at the university, but the university did not teach me anything that could save me like grandma did. I do have some good news though, I have found comrades who are also looking for safety and water, they seem to be hiding as well, they are all women. It is an odd group of women I found, I sense that they are all rejects and exiles like myself, but I am afraid to ask because I do not want them to ask about my status as an undocumented immigrant either. 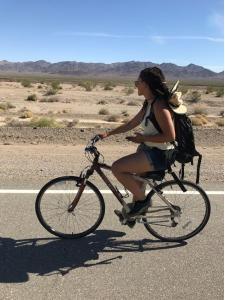 We found a place where we can stay, a man named Severin gave us his spot as he is moving on, he left with us enough water to last about a month. Given the limited water resources and our desire to stay in this temporarily safe place for as long as possible, we have agreed to only take four gallons of water a day. At first, we thought we would have two gallons of personal water (drinking, washing, etc.)  and two for communal (cleaning, cooking, etc.)  but after discussing it with each other we agreed that we should have three gallons for personal since showering and drinking will take the most water. It is funny I came all the way to the United States to find water and here I am rationing it out like we have to do back at home. We also said we will be using grey (or reused) water for flushing the toilet. However, on the first day we did not have any grey water and could not flush the toilet, it started to stink! Thankfully, we found some salty water that we are using as a substitute but I am not sure how long this will last, and we are only flushing biosolids, leaving urine in the toilet. We will need to improve our greywater system. The best part of about this system is that they have put me as well as another woman of color in charge of the water.  This is good, this tells me they are not like most Americans who uphold a racial caste system. I wonder if I would still have this position if they knew I was undocumented though… Anyways, each day myself and Skip dole out the water, track how much each person gets on a sheet and then if they want more water we also track that (they get three gallons total). It’s a pretty good system. To be honest, the hardest part is that being that we are outside of civilization, we have to bicycle out ten minutes to get internet or cell service. But I promise to check in at least every other day. I have to go now, the internet is sparse.