Skip to content
He Came To Drain the Swamp but instead, He Drained the Aquifers

He Came To Drain the Swamp but instead, He Drained the Aquifers 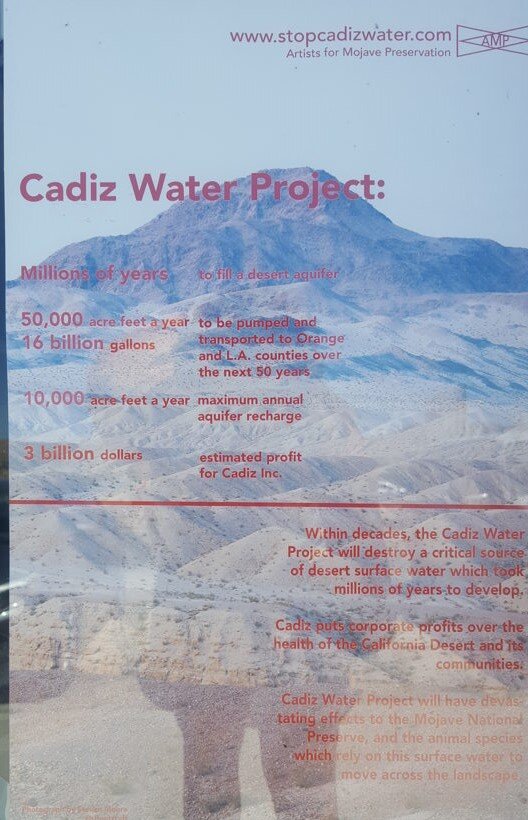 They Tried to Warn Us

Some of you have been wondering how exactly we got to this point – exiled within this country with no legal access to potable water. Some part of the story can be traced back to our neighbors here in the Mojave – Cadiz, Inc.

If you remember, it really felt like the end of the world after Trump got elected. At first, most Americans acted in a rational way, mass mobilization as a response. But after awhile, people got desensitized; they stopped showing up and they stopped paying attention. Circumstances gradually got worse in many sectors, especially regarding environmental stewardship, but as people adjusted to “the new normal” the decline was able to happen without protest or mass response.

A pivotal point in this downslide can be traced back to the Cadiz aquifer system. For ten years prior to the 2016 election, the federal government acted rationally to protect desert water resources – continuing turn down the prospective water scheme (which claimed ownership over an ancient aquifer in the Mojave desert proposing to redirect it with many miles of pipeline in order to supply Southern California’s insatiable thirst). The Cadiz, Inc. project set a number of precedents including the beginning of the privatization of water, as a claim was made that the “owner” of the water was a private company called Cadiz, Inc. who bought land above the aquifer. They would, in turn, sell this water to a public Metropolitan Water District in Orange County, CA. SoCal’s increasing population, development, and overconsumption even during years of drought left it operating in a state of scarcity indefinitely, looking for new water sources to fill swimming pools and keep lawns and golf courses green.

The Cadiz, Inc. project required an investment of over $150 million dollars to build a 43-mile underground pipe from the Cadiz aquifer in the Mojave desert to the Colorado Aqueduct, after which it will merge with water headed to the coastal cities. Cadiz had no prior experience building infrastructure yet was contracted to build this underground piping that would supply entire municipalities. The founder of Cadiz was a British man named Keith Brackpool “who came to the U.S. after pleading guilty to criminal charges relating to securities trading in Britain”.  However, Brackpool had friends in high places that allowed this horrible plan to continue even after scientists and locals organized to stop it; namely the former Governor of California, Gray Davis, people on the California Public Utilities Commission and even the Secretary of the Interior.

As scientists had been arguing for years, the Cadiz Valley Water Conservation, Recovery, and Storage Project was not ecologically feasible. They started drawing 50,000 acre-feet a year (equivalent to ~16.25 billion gallons a year or put in another way Cadiz pumped “enough water from the desert to fill the Rose Bowl to the brim, and then drain it all away, 194 times a year”. However, USGS stated that Cadiz had overestimated the aquifer’s recharge capacity (how quickly the water fills back up the aquifer) by 15x. Instead of the supposed 32,000 acre-feet a year rate Cadiz claimed was safely available to extract through regular recharge; the recharge rate was closer to 5,000 acre-feet a year. If the science had been able to be presented and taken seriously – the project never would have passed an environmental review.

This then became the lynchpin of the project, for those who were against it, all they needed to do was get the government to conduct a thorough environmental impact review (EIR) of the project and that would be the death of this nonsensical boondoggle. Under President Obama, and with the support of CA Senator Dianne Feinstein, it seemed like this project was killed off, but as soon as Trump got into office he accelerated this project to number 15 on his list of 50 national infrastructure investment priorities. The project’s fate, and the fate of this fragile desert ecosystem was sealed. When one of Cadiz’s CEO’s former employees became nominated as Deputy Secretary of the Interior, it further demonstrated the power of political influence, as the Deputy stripped California BLM of its authority, allowing BLM administrators in Washington DC to wave away all regulations and environmental review, green lighting our current disastrous state.

Immediately, the project relocated enough water to supply 100,000 houses or 400,000 people, allowing Southern Californians to continue to grow past their means; developing larger cities in a land that could not sustainably supply more people with water and that would be threatened as soon as this water source dried up. As was suspected, which is why the Council for Biological Diversity filed a lawsuit, within a few years we started seeing damages to the Mojave Desert ecosystem. The pools of water Cadiz, Inc. had categorized as “wasteful”, were islands of oasis for migratory birds, reptiles, raptors, and Bighorn sheep. When these dried up, so did these desert populations that relied on them. Sacred Native American sites like the Old Women Mountains were also severely and irreversibly damaged by the draining of the aquifer system. Most immediately apparent was the desiccation of the Bonanza Spring, which “fed a half-mile corridor with towering willows and cottonwoods”. This spring was supporting much of the desert wildlife, so when it dried up vegetation and animals perished. As had been suspected but not confirmed, Bonanza Spring, a spring that had existed for hundreds of years, even before they started keeping records, was fed through the aquifer as well. The saddest part is once this ancient spring dried up there was no going back, “Once a spring dries up, the hydrological connectivity is broken, the soils deflate and the spring cannot be re-established” (Anderson, 2017). But this was just the tip of the iceberg.

Once this project had been approved it set the precedent that water underneath private property belonged to the surface property owner, allowing corporations to privatize a natural resource – making quick millions while killing off the regional ecosystems that have developed and been stewarded for millennia. As the Mojave desert dried up, the Joshua Tree communities began to be affected. Though the majority of aquifers they relied on were in Joshua Tree National Park, after two years of Trump’s military-heavy and ecologically light budget, the USA was in the type of debt that banks didn’t want to loan to and the price of the dollar fell sharply. Desperate, Trump did what any cutthroat capitalist would do: privatize government to “balance the budget” while still ignoring that 75% of the budget was spent on the military for guns and bombs. Schools, prisons, post offices, and parks were a few of the many things that became privatized. When the National Parks went up for bid to private corporations it was mining and water companies that bid highest to get at the minerals and other natural resources that were being conserved by the Parks. This blew open the floodgates, creating an open season for drilling, mining and exploiting the planet. The aquifers under the Joshua Tree National Park were some of the first to vanish, since, without increased conservation efforts, coastal Southern California was insatiably thirsty.

With groundwater depletion now the order of the day, ecological chaos ensued, ecosystems crashed and the flora and fauna that had once brought over 2 million visitors to Joshua Tree National Park were devastated, their populations falling below recovery.  Even worse is that the aquifers in the San Andreas fault that dried increased the plate tectonic activity and the risk of earthquakes. Thus we find ourselves in this spreading state of financial, ecological and physical instability.

In just a few years, the actions of a greedy government and short-term profiteers, which ignored the ecological wisdom of the scientists and Native people, had ruined the desert ecosystems and communities of Southern California.

Now what will we do?

This is science-based fiction, all the facts presented here are real and the outcomes of the future though have not happened yet are plausible realities based on these facts presented and the trajectory we are on. The facts come from credible sources (that are linked directly in the article) as well as interviews with the following experts: lleene Anderson, Senior Scientist/Public Lands Deserts Director at Center for Biological Diversity, and officers of the scientific resource division in Joshua Tree National Park, whose names will not appear as the new Federal government doesn’t allow them to talk about climate change with the public. 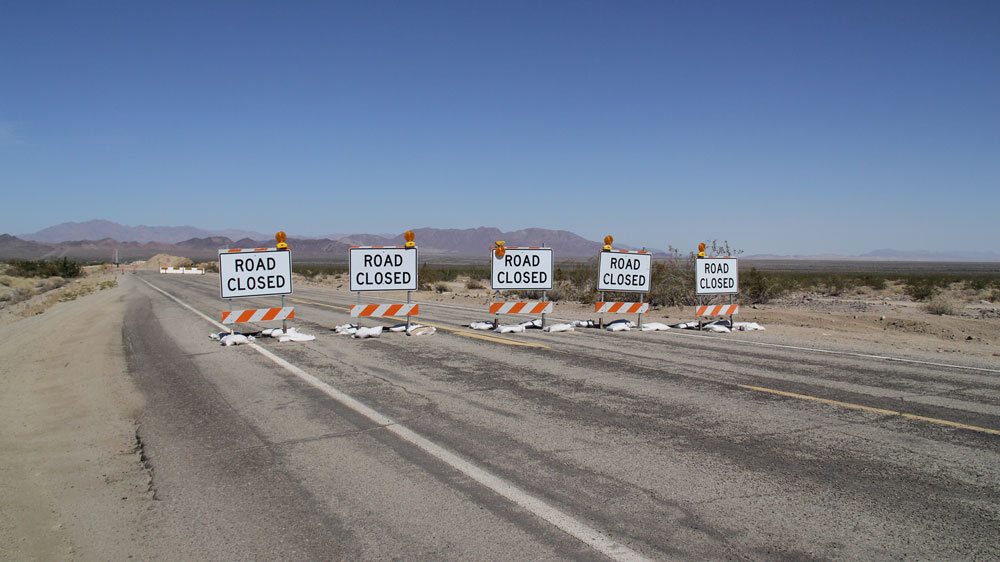 The Cadiz Inc. Land blocked off from the public